Politically correct note: “weirdness” is in the eye of the beholder, and I’m obviously writing this from a Western perspective. It’s instructive to remember that a Chinese colleague of mine still finds cheese of any type to be tough going, and considers the very idea of intentionally moldy (blue) cheese to be utterly disgusting. Without further ado…

The Raw, the Bleeding and the Squirming

Eating sushi was the first step in my transformation from a teenage picky eater to an obsessive gourmand. I fell in love with the stuff in Japan and have since eaten countless kinds of raw fish, shellfish (shrimp, lobster, crab), molluscs (oysters, cockles), etc. Some more interesting highlights, all in Japan unless otherwise noted: 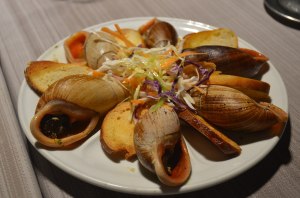 I used to draw the line at insects, but of course I had to cross the line once to see what I was missing out on. (Not much, it seems.)

Everything up to here is still more or less OK in my book, but some of this stuff is just foul. There’s a reason spoiled things are programmed to make us gag, dammit!

How I Want A Drink, Alcoholic Of Course