For the past 15 years, my father has been talking about traveling “from Hesa [Helsinki] to Lhasa” by train.  This year, we finally did it, and it was enough of an adventure that I’m resurrecting my long-dormant travel blog to tell the tale.  Expect plenty of pictures and less text. 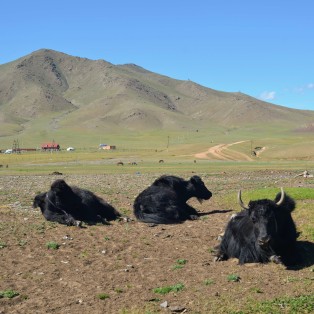 Pulling off a trip like this requires quite a bit of preparation, since each of Russia, Mongolia, China and Tibet require their own visas or permits, which needs to be applied for in advance…  but not too far in advance, since they have expiry dates!   Most resources about the Trans-Siberian advise people to go via a travel agency to get these, but (excepting Tibet) it’s entirely feasible to do this on your own, so here are some notes for posterity.

Some personal notes, although the details will vary based on your citizenship and where you apply: this is all for an Australian applying in Australia. Also, despite minor differences in the requirements on paper, standard Australian passport photos were fine for all three.

This is the most complicated by a long shot, so get this one first. I applied in person at the Russian consulate in Sydney, using the detailed step-by-step guide here, which was extremely helpful.  The guide, that is; the consulate, on the other hand, felt like a live-action version of Papers Please.   Apply for your visa appointment well in advance, since it may take a few weeks to find a free slot!

On arrival, I was first treated to the sight of an extremely angry businessman chastising a security guard in an ill-fitting green polyester suit on the other side of a locked gate: “You’ve been incredibly rude! I’ll report you to your manager!”  The guard didn’t even roll his eyes, just asked me for my appointment and let me in when I claimed to have one.

At reception, though, another unfortunate soul had made a reservation but had neglected to bring his chit.  Nyet, try again in a few weeks.  The high-tech QR scanner didn’t much like mine either, but it grudgingly accepted the 16-digit code when punched in manually.

The waiting room was plastered with signs strictly forbidding the use of mobile phones, which were roundly ignored by everybody including myself.  When my number came up, I headed to counter 4, whose previous victim was undergoing an interrogation:

– You are attending a conference?
– Yes.
– You cannot use a business visa, you must apply for [inaudible] visa.
– But but…
– Here is form.  Next!

I got to the window.  My friendly greeting was unanswered.  I piled my papers and passport on the counter and careful examination ensued.  Everything was going swimmingly, until…

– Your visa invitation is 1 to 5 July, but your visa application 1 to 8 July.
– Yes, I am traveling out by overnight Trans-Siberian train.
– Why are you going to Irkutsk?
– To see Lake Baikal.
– Hmm.

This was clearly highly suspicious, but the bureaucrat showed grandmotherly kindness and accepted my unworthy application.   Learn from my mistake, use the same dates on your letter of invitation (I used ivisa.ru) and the visa application, and feel free to add plenty of buffer — you’re never asked for an actual hotel reservation.

So now it was time to pay up at counter 6, but the old Chinese lady there was in trouble too.  Neither of her credit cards was accepted, EFTPOS didn’t work either, and rejected receipts were piling up.  The gentleman behind me had prepared the exact amount in cash, which was also unacceptable.  Eventually my turn came and, wonder of wonders, my card worked!  The printer spat out a receipt, Svetlana sliced it in three with a ruler and gave me the smallest piece.

– Come back May 17. No appointment, collect at reception. Next!

I returned as requested, arriving at the consulate when they opened at 9 AM sharp, along with a bunch of other people.  We filed inside, but the “Visa Pick-Up” counter was resolutely closed.  Eventually Feodor arrived, but when somebody had the effrontery to approach the counter, he silently pointed at a small sign saying that Visa Pick-Up is available from 9:30 AM.  So we waited for half an hour under the steely glare of Comrade Putin, and then I finally got my grubby mitts on my shiny new visa.  Victory!

Cost A$135, processing time two weeks plus wait for appointment. 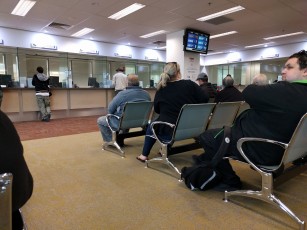 By comparison, getting the Chinese visa at the fully-outsourced Visa Center in Sydney was a miracle of socialist efficiency with Chinese characteristics.  Appointments are required, but are usually available next day and apparently you could get one on the spot too.  I arrived two minutes before my appointment at 10:00, and my number was called at 10:01.

You will need to fill out your tediously long application online and print it; it’s not an online application!  You will also likely be asked for proof of how you will enter and depart China, so bring along train/flight tickets or reservations.  I also had an itinerary from a tour agency in China, which is not strictly necessary, but it was sufficient to cover all other documentation needs.

One catch if you’re also planning to visit Tibet: China won’t grant visas to people who want to go to Tibet unless they already have Tibet Travel Permits (TTP), but you can’t apply for a TTP unless you already have a visa.  The only way around the Catch-22 is to make up an innocuous itinerary that involves panda-watching in Chengdu or something for visa purposes, and then apply for the TTP afterwards.

There is no Mongolian consulate in Sydney, so I applied via post at the Mongolian Embassy in Canberra. The documentation and travellers’ reports are not clear on whether you need to include train tickets for a tourist visa, but I called them up and was told that a “tourist agency itinerary” was enough. I sent along my ticket reservation receipts (not an actual ticket) and that was good enough. Also, Russia & China take credit cards but Mongolia insists on a bank cheque, so order that at least a week in advance.  It’s also highly advisable to register your mail both ways, meaning you need to prepare a self-addressed envelope and get the post office to register it before you send off your application.

Note that transit visas are cheaper (A$150) but have tighter documentation requirements (“Detailed travel program provided by the Tour agency”), so I played it safe.  In retrospect, though, Mongolians don’t seem to be the same kind of sticklers for paperwork as the Russians and the Chinese, so this would probably have been fine.

Unless you’re a PRC citizen (including HK/Macau), the only way to visit Tibet is to join an organized tour.  This is expensive, particularly if you do what we did and opt for a custom/private tour, but it’s a pretty routine process and the tour agency handles all the paperwork.  That said, there is a certain element of nail-biting involved, since the permit can only be applied for 20 days before arrival, takes around 8 days to grant, and can be denied for no reason if there’s anything happening in Tibet that China would prefer the rest of the world didn’t hear about…

Before 2008, there were occasional stories of people hitching into Tibet and sneaking around without permits.  As of 2018, I feel confident in saying that you won’t get very far these days: your permit is checked constantly, on average 2-3 times a day, and in places including train stations, airports, road checkpoints, hotels and major tourist attractions like the Potala Palace.

I started my paperwork on April 21st and received my final visa on May 31st, so around 40 days end to end.  (The Tibet permit can only be applied for 20 days before entry into Tibet, but this is handled by the travel agency anyway.)