Around 10 PM at night, we trundled across the Mongolia-China border into the dusty town of Erenhot (二连 Erlian).  One of the few pleasures of international train travel is that the border crossings and their inspectors come to you, but China wasn’t having any of it: we all had to disembark with our luggage and go queue up for passport and customs.

And then we waited until 2 AM while our bogies were changed from Russian wide gauge to Chinese standard gauge.  Officially, the sparkly new International Waiting Room had all sorts of amusements including tax-free shopping, a bar and a certified 5-star bathroom; in reality, it lacked all of those as well as air-con, toilet paper and enough seats.  After various conflicting answers and general confusion, I was granted a magic plastic token that let me go outside and check out the jumbled shops and pharmacies, and most importantly, acquire some bananas and the first of many bottles of Yanjing Beer to come. 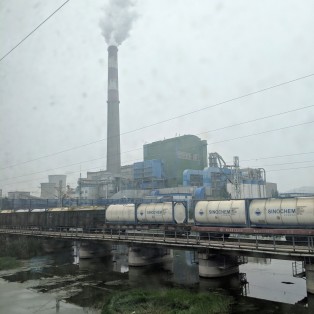 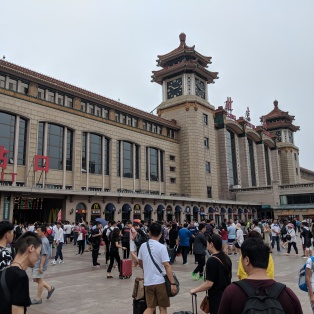 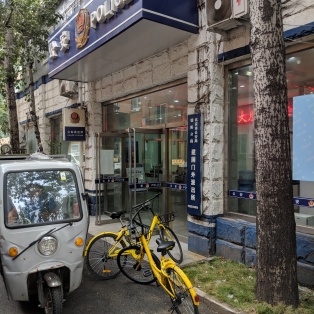 By the time we woke up next morning, the scenery had changed to rolling green hills, occasional clusters of buildings and factories, and steadily thickening haze.  Viaducts for the Zhangjiakou high-speed rail line, being built for the 2020 Winter Olympics, were often visible and made our clunky train feel rather obsolete.  After arrival at Beijing Station, which seemed to contain more people than all of Mongolia, our host whisked us away for a traditional Chinese welcoming ceremony: foreigner registration at the local Public Security Bureau (公安部 Gong’anbu) cop shop, painstakingly pecked in one finger at a time.  Now we were in China! 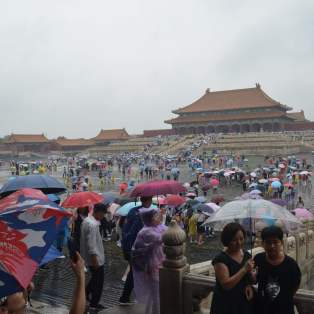 This was my first visit to the Chinese capital, and I wasn’t expecting much: all you ever see on TV are the inhumanly scaled plazas and buildings around Tian’anmen, designed to make citizens feel like the worthless ants they are compared to the might of emperors old and new.  The shopping district around Wangfujing, all department stores and shopping malls stuffed with name-brand shops, plus the slick modern offices and hotels around Chaoyang, including the dystopian China Central TV aka Big Pants Building (大裤衩 dà kùchǎ), could also have been straight out of Tokyo or Seoul. 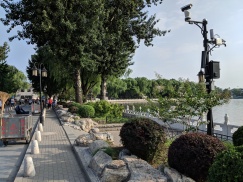 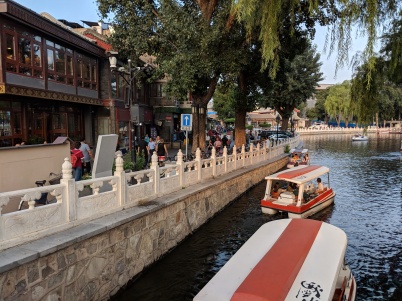 But the hutongs around Shizhacai, while now tarted up for tourists and beer-brewing hipsters, remained surprisingly peaceful and lived-in, and the canals and alleyways around Qianhai Lake with weeping willows and pedal boats were green, vibrant and colorful, at least in midsummer. 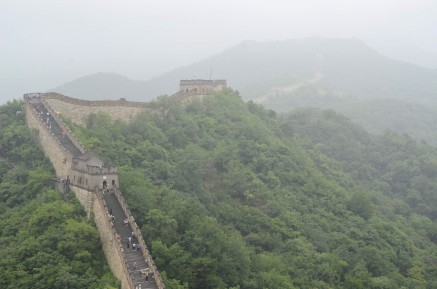 The Great Wall at Mutianyu (慕田峪), about 1.5 hours north of central Beijing, was a worthwhile excursion, both surprisingly lush and surprisingly smoggy.  Those stairs were a real workout, particularly in the sticky heat of midsummer, and I was glad to take both the ski lift up and the rather ridiculous but still amusing toboggan ride down.  Pro tip: there’s a solitary little snack shop at the top, which will instantly open a frosty bottle of Yanjing for you if you so much as mention the word pijiu (beer) — and attempt to charge you 85 RMB (US$13) for it.  At the bottom of the hill, the same beer will cost you 20, and even that’s pricy by Chinese standards. 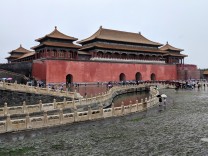 Beijing’s other mandatory attraction is the justly reknowned Forbidden City , once the home of the Emperor and now the showcase of China’s Communist mandarins.  There was a queue of several hours to see the pickled corpse of Mao, so when a torrential downpour hit we abandoned that idea and proceeded to the palaces.  The complex is enormous, and despite notional visitor limits (book your tickets online!), it was packed to the gills with local tourists, all armed with pointy umbrellas.   The Outer Court, through which you enter, consists of a series of identical-looking but empty gates and plazas, so there isn’t even much to see.  Mostly to get away from it all, we paid a little extra to visit the Treasure Gallery to the east, and this turned out to be the best move all day: the crowds were thinner and the scale was more reasonable, as this is where the Emperor and his household actually lived.

We ended up in Xi’an through a lucky mishap: the sleeper train we wanted to take from Beijing to Xining was full, and when pondering alternatives, I realized we could take a sleeper to Xi’an, spend a day there, and take an evening bullet train to Xining.  Win! 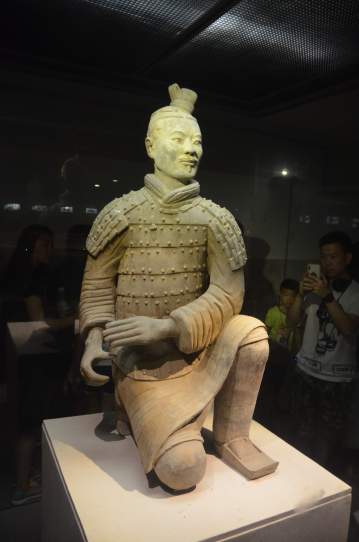 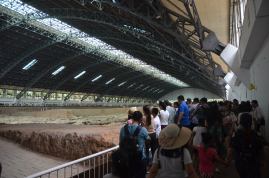 The thing to do in Xi’an is to visit the Terracotta Warriors, which guard the tomb of Shi Huangdi, the founder of the Qin dynasty and the kind of megalomaniac who makes Mao look modest and reasonable.  In 230 BCE, he unified China for the first time, declared himself emperor, standardized all the things (writing, currency, measures, axles etc) across the vast country, burned all old books and executed those who didn’t comply fast enough, built a necropolis nearly 100 km² in size (the vast majority of which remains unexcavated) and had basically everybody who built it executed.  Unsurprisingly, it’s quite a sight, and enough Chinese agree that it’s now the country’s second-most popular attraction, second only to the Forbidden City.  Don’t expect to have too many moments of peaceful contemplation. 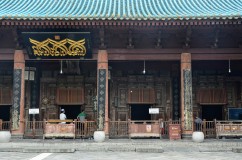 Much further down that list is the Great Mosque of Xi’an, buried in the mazelike depths of the Muslim Quarter (回民街 Huiminjie), and probably the least mosque-like mosque I’ve ever seen.  If somebody swapped the signs, it would substitute quite nicely for, say, a Confucian temple or the Emperor’s former summer residence: for example, the pagoda above is actually a minaret. 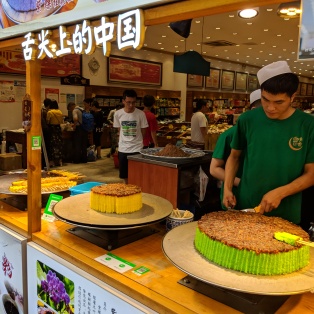 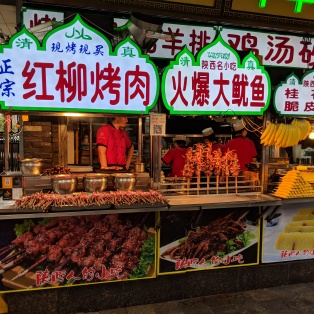 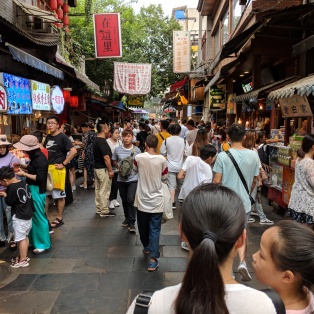 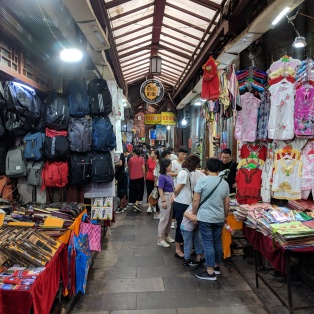 While Beijing and Xi’an are firmly on the beaten track, it’s safe to say Xining is not.  It may be the capital of Qinghai Province, but by Chinese standards its 2.3 million people barely qualify as a city, at least when compared to Xi’an’s 12m or Beijing’s 21m.  What’s more, while it’s been around for over 2,000 years and was a major staging post on the Silk Road, a massive earthquake in 1927 plus Japanese bombing in 1941 means you’d be hard put to find a historical attraction worthy of the name in the city.  The sole reason we were here was that, at an altitude of 2,600m, this gave us a chance to acclimatize a bit, and the only other city in these parts, the industrial center of Golmud, is by all accounts even more dull. 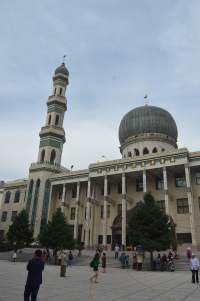 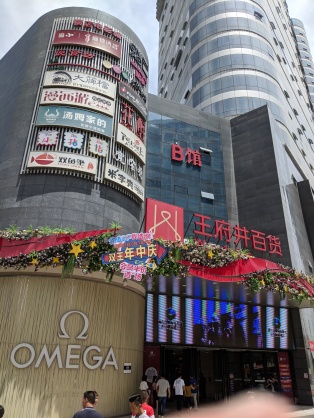 Given these low expectations, Xining was mostly a pleasant surprise, undoubtedly provincial but largely prosperous and with new infrastructure ranging from bridges and highways to trains sprouting everywhere, virtually all of it built since 2010.  Our Taiwanese cracker conglomerate hotel was golden bling to the max, the shopping malls of Xidajie (西大街) were bustling with real department stores and fake Apple Stores, Mojia St (莫家街) was wall to wall with restaurants.  Only slightly off the beaten track did you remember you weren’t in Beijing anymore, with meat hanging on open-air hooks at the street markets of Shuijing Alley (水井巷) and the green signs and ornate skullcaps of Hui Muslims dominating the local culinary scene even more thoroughly than they did in Xi’an. 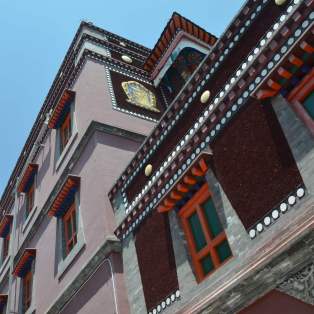 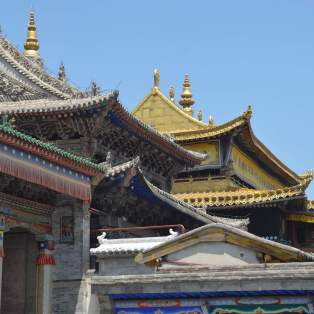 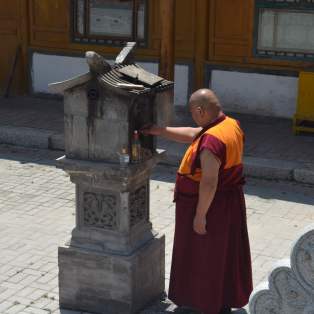 Xining’s one major draw is Kumbum Monastery, or Ta’ersi Temple (塔尔寺) to the Chinese, some 40 km outside the city.   One of the largest Tibetan monasteries outside Lhasa, this was the childhood home of the Dalai Lama (you can even find a solitary photo if you look very carefully) and, while much reduced from its pre-Cultural Revolution glory, is still an active temple.  I expected to find some Tibetan pilgrims here and did, but I did not expect tour buses full of Chinese pilgrims, herded about by tour guides and stuffing notes ranging from 0.1 to 100 yuan into every nook and cranny of every statue and altar.  Clearly China’s economic boom has also brought with it a surging market for spiritual fulfillment. 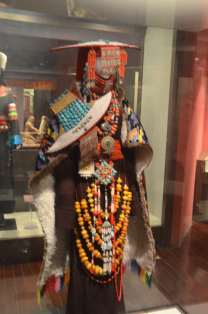 Much more sedate, in fact positively comatose, was the official state-sanctioned Tibetan Culture & Medicine Museum in a faux-Tibetan concrete monolith on the northern outskirts of town.  This showcased Tibetan culture as the Chinese government would like it: colorful, safely encased in static glass displays, no actual Tibetans in sight, and with an overpriced gift shop on the way out.

In the evening, we clambered aboard train Z6811 and started our slow climb to Tibet.

<<< Ulaanbaatar, Gorkhi-Terelj and the Gobi Desert | Lhasa and Tibet >>>